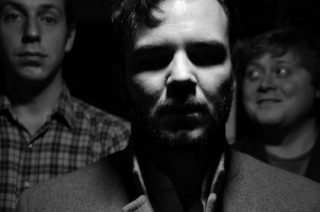 To call Baltimore’s Future Islands “interesting” would be a gross understatement. Lead singer/growler Samuel T. Herring takes the listener on a journey on par with the most disturbing David Lynch creations. He drifts seamlessly from a guttural grunt to a strong and stunning voice, sometimes flirting with a falsetto. And he’s funny. It’s as if Henry Rollins and Jack Black had a love child. A dark and brooding love child.

Imagine all this with a backdrop of synth-rock epicness and you’ll understand the essence of Future Islands. I can guarantee that this is like nothing you’ve ever seen or heard. And after most songs, Herring spit out a “Fuck right!” to somehow underscore how awesome that last song was. No reminder necessary. His passion and sweaty performance convinced the roomful of listeners at the EARL that this was a very special Thanksgiving weekend treat.

Herring’s scary demeanor aside, this was one hell of a rock show. The trio also includes the talented Gerrit Welmers (keyboards and programming) and William Cashion (guitars). No eye contact among the three was witnessed. Maybe Welmers and Cashion are afraid of Herring, too. They simply did their thing and kept their eyes averted for most of the evening.

Touring in support of their recent release On the Water (Thrill Jockey), the boys grooved into hints of vintage New Order and Cure. Some songs take you down three different roads at once, as if three genres have collided. Songs like “Balance” and “Before The Bridge,” from the new album, along with terrific selections from last year’s In Evening Air including “Vireo’s Eye,” “Walking Through That Door,” “Tin Man” and “An Apology” were a welcome change from the usual riff raff heard in local bars. This is a band to watch and you owe it to yourself to check them out now.

Self-proclaimed “stump rockers” Lonnie Walker opened the show and exceeded the crowd’s expectations being the first band in a three-band evening. The Raleigh natives played like headliners. Drawing comparisons with the dB’s and the Feelies, these 80s-college-rock-sounding dudes are for real. Such righteous songs as “Grape Juice” and “Teenage Poem” gained the audience’s attention immediately. The band is currently touring in support of These Times Old Times (Terpsikhore).

Ed Schrader’s Music Beat stunned and amazed with reckless abandon. Two guys: one banging a single drum while singing, the other one (Devlin Rice) playing the bass and being ginormously intimidating. If these guys require a label for their music, it has not yet been invented.

Ranging from screaming anger (“Gas Station Attendant”) to low-key, funny hooks (“Rats”), Schrader’s songs thrilled and delighted virtually everyone in the room. He repeatedly echoed what one fan apparently stated, that he was reminiscent of Jim Morrison (the truth is, he sounded very much like the late Doors man). These two woke up the room (and everyone else within a ten-mile radius). Three one-of-a-kind acts on the same stage and the same night. The EARL hit a homerun with this one.