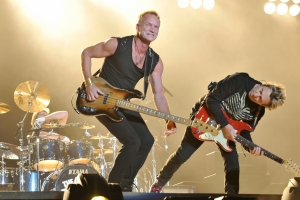 Location: Philips Arena, Atlanta, GA, November 17, 2007 Support act(s): Fiction Plane In the company of: Chris Let me just begin by saying I bought the shirt (i.e., …drank the Kool-Aid). It’s not because the show was great (It was). It’s not because I buy a shirt from […]

THE POLICE continue to dominate

The Police with UB40 at Kemper Arena in Kansas City, MO, November 24, 1983 After having seen the Synchronicity concert this past summer in St. Louis, I knew what to expect. This was a band at the pinnacle of success…God, they knocked Thriller out of the number one […]

THE POLICE synchronize with fans

The Police with Joan Jett and the Blackhearts at The Checkerdome in St. Louis, MO, July 24, 1983 For this, my second Police show, I was now in full-fledged awe. It was the Synchronicity tour and it was fantastic. I made the road trip to St. Louis and […]

The Police with Joan Jett and the Blackhearts at Kemper Arena in Kansas City, MO, March 25, 1982 Having recently become a Police fan, this was my first Police show. In support of their fourth studio album Ghost In The Machine, they created an energy that Kemper Arena had […]