Live Review: Crowded House at The House of Blues in Chicago, 9/5/10

Neil Finn has been one of the planet’s most talented singer-songwriters since 1980, when he brought his brother Tim’s band, Split Enz, into the mainstream with fine songs such as “I Got You,” and “One Step Ahead.” Once that ran its course, Finn grouped with Nick 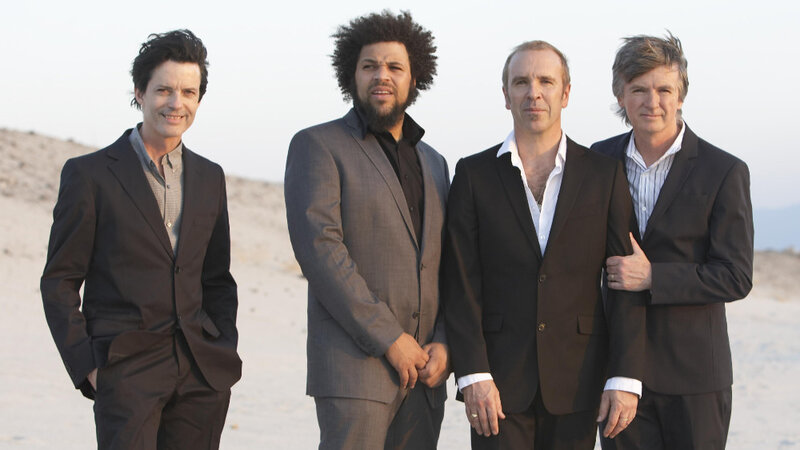 Seymour and the late Paul Hester forming Crowded House in 1984.

Fast forward 26 years to the House of Blues in Chicago, with Crowded House on tour promoting their sixth studio album Intriguer. Opener “I Feel Possessed” kicked off the festivities at the sold out venue. Like many Finn-penned tunes, this classic begins innocently enough then shifts into a higher gear. But on this night in Chicago, Crowded House shifted nearly every song into hyperspace gear. This was the most rocking show by the band ever witnessed by this reviewer (and he’s seen Finn perform six times). It’s as if they wanted to prove their relevance to an ever-changing musical landscape, staying young all the while.

The second song was “Mean To Me,” from their 1986 debut album. This rocked even harder, with Finn’s voice as perfect – if not better – than it ever was. And he is one of the most underrated and superbly skilled guitar players out there. Of course, his songwriting is the only thing that surpasses his voice and guitar work. He is frequently compared to Lennon and McCartney for a very good reason.

Several songs from Intriguer made the cut including the excellent “Archer’s Arrows” and “Either Side Of The World.” Strangely, the lead-off single from the album, “Saturday Sun,” was left off the set list. Neil was in top form, even bopping up and down on some songs and having a fantastically enjoyable time – as did all bandmates (bassist Nick Seymour, multi-instrumentalist Mark Hart, and drummer Matt Sherrod). Always smiling, joking, and laughing, these guys love playing together and it shows.

At one point, it appeared that Neil had the wrong guitar. To kill some time, Mark Hart sang a soulful and bluesy version of CCR’s “Born On The Bayou” (definitely an ode to that whole House of Blues thing).

Neil is also one of the best at banter and is funny as hell. He had been sporting a not-so-excellent mustache for the past couple months and was clean-shaven on this evening. Between songs, a fan yelled, “Thanks for shaving!” To which Neil replied, “Thanks for shaving? Have you not learned anything from me over the years? The mustache is back on Monday morning!”

It was evident that the packed house was packed with serious CH fans. On most songs, the foursome was accompanied by a roomful of voices, not missing a word. Finn is famous for his call-and-response moments. And he always tells the crowd that they sounded beautiful.

After a rousing and rocking performance, the boys returned for a fantastic encore. On the stage was a rolled up poster. Neil picked it up, read it, then showed it to the fans. It read, “PLEASE PLAY ONE STEP AHEAD.” This was a song from his days with brother Tim Finn’s group Split Enz. He then said, “Let’s put it to a vote…I’ll play the beginning guitar parts from “One Step Ahead” and “I Got You” (another Split Enz tune). He played, the fans voted, and “I Got You” won it. Not before, though, Mark Hart whispered something in Neil’s ear. Neil then announced that it was Rodney’s birthday and Rodney likes that song (Rodney is on the CH crew). The band then ripped through a scorching version of “I Got You.” It was surely the most scorching and excellent version of that song ever played.

As Crowded House passed the two-hour mark and were deep into the encore set, Neil looked to his left and exclaimed, “There he is!” He then asked the audience if they would like to meet his Dad, to which we all responded with cheers and applause. Neil walked over, picked up a laptop, and brought it back to center stage. “Ladies and gentlemen, Mr. Richard Finn.” And there was his old man, waving at us on that laptop screen, all the way from Auckland, New Zealand. Neil was grinning from ear to ear. Mr. Finn then, peering out over the crowd, said “Looks to be 20-30 people there!” Neil simultaneously smiled, blushed, and beamed with pride. As the beginning notes of the final song were played, Neil said, “This one’s for you, Dad.” “Better Be Home Soon” was that song.

For the average fan in attendance, initiation was at hand. For the die-hard fan, this night was glorious and could never be repeated. One can dream, though.

Fellow New Zealanders Lawrence Arabia opened the show and complemented the headliners nicely. What started off like country rock (a tad Wilco-ish) turned poppy, and the quintet really heated the place up. Their single “Apple Pie Bed” fell somewhere between the Crowded House and Squeeze sound and was an audience favorite.

Members of the band, along with Eliza-Jane Barnes (who records and tours with Neil’s son Liam) were also onstage to nail “Weather With You.”