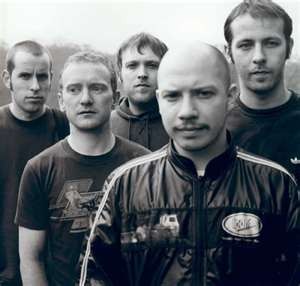 This five-piece band from Glasgow, Scotland must be huge fans of Spinal Tap because they had it turned up to 11 all night. Mogwai is known for the quiet-loud-quiet pattern in many of their songs. But for Atlanta fans, it would be quiet-sonic boom-quiet, which only served their music better. On the road in support of their awesomely titled seventh studio album, Hardcore Will Never Die, But You Will (Sub Pop), the band is enjoying critical success and growing their fan base in every town. Last year’s Vincent Moon-directed Burning was Mogwai’s first concert film (accompanied by the Special Moves soundtrack) and brought the band to a new level of fame, showing them doing their thing live.

To clear things up, Mogwai means “evil spirit” in Chinese and was also the name of the creatures in the film Gremlins. It has been said that the band had always planned on choosing a better name, but never got around to it. Mogwai is one of the tightest instrumental rock outfits playing today (they’ve also been called post-rock). Mogwai’s style was influenced by such bands as MC5, My Bloody Valentine, Sonic Youth, and Fugazi. Founder Stuart Braithwaite led the band through a stunning set at the Center Stage in Atlanta. Several tracks were heard from the new Hardcore, but they did mix in many from previously releases.

The fabulous “Mexican Grand Prix” exhibits a rare set of vocals for Mogwai on their usual all-instrumental landscape of sound. Although the listener may not be able to decipher what leader Stuart Braithwaite is actually saying, it’s effective nonetheless. Other Mogwai selections you should know by heart were “You’re Lionel Richie,” “Take Me Somewhere Nice,” and “Rock Action.” Incidentally, Rock Action became the moniker for Mogwai’s own record label featuring several diverse acts including Scotland’s own Errors.

Errors are currently touring with Mogwai and opened the show on this night in Atlanta. A promising group known as “post-electro,” they were the perfect fit for a Mogwai show. Errors have two fine LPs under their belt: 2008’s Its Not Something But It Is Like Whatever and last year’s Come Down With Me.