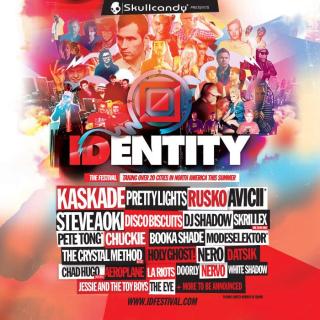 The shaking ground you felt and that thumping you heard last Tuesday was not a result of the earthquake. It was a special collection of electronic artists and DJs cranking it up to 11 on the volume dial. Lakewood Amphitheatre was host to the Identity Festival, a loud and raging affair sponsored by Skullcandy. It was also hot. For those not in the covered seat area for the main stage, it was even hotter. The Advent Stage was located in the parking lot. And with Atlanta temps hitting the mid-90s, it was a cooker.

One of the early acts to hit the stage was Afrobeta. Hailing from Miami, the avant-dance duo are Cuci Amador and Tony Smurphio. Sadly, their set was scheduled a bit before the students and workers of Atlanta stormed Lakewood, so a smattering of fans were present. Their energy and enthusiasm were there, as well as some very danceable music. But it was early. “Hey Atlanta,” Cuci yelled, “Do you guys party? Maybe? After the valium wears off?” This comment could have resulted from frustration, but it was fair. Later, Cuci told the Atlanta Music Examiner, “No, we weren’t upset! We’re new and not many people have even heard of us. It’s great to be on this tour. I just like messing with people.”

The Afrobeta set was a spirited one, featuring the new addictive single, “Play House” from the forthcoming Under the Streets (Aug. 30 on Do IT). A true highlight of the set was their electronic and excellent cover of Nirvana’s “Lithium.” They should put this one on a record.

The New York collective Hercules and Love Affair offered listeners some wonderfully wild songs. Again, playing to a small audience can be challenging, but they performed as if to a crowd of 20,000. Touring in support of their impressive new release Blue Songs (Moshi Moshi Records), the group inspired much dancing, sounding at times like a modern day version of Erasure (but with tremendous vocals).

Holy Ghost! brought there electronica-meets-eighties sound to the festival. While still playing to a somewhat thin crowd, these New Yorkers showed us why they’re one of the hottest bands out there today. The band – headed up by Nick Millhiser and Alex Frankel are out on the road with the Identity Fest playing terrific selections from their latest self-titled release (DFA Records) including “Do It Again,” “Static On The Wire,” “Hold On” and the terrific “Wait And See.”

They took the small crowd in stride and played through the oppressive heat. You can catch them later in the fall in Atlanta at the Masquerade, according to lead singer Alex Frankel.

The Crystal Method, headed up by birthday boy Scott Kirkland along with Ken Jordan are pretty much the granddaddies of this tour, having been around since the early nineties. But by contrast, these guys had more energy than many of the newer artists combined. By the time they took the stage, the largest crowd of the day had gathered and more approached in a zombie-like state once the Crystal Method started their noise.

This is when the festival became a full-on rave. It’s good to know that these fortysomethings can still cause high school heads to explode. It was a mad house, in a happy sort of way. One of the highlights had to be their very first single, “Keep Hope Alive” from 1994. Between inviting 20 people (mostly female) onto the stage to take part in a light saber battle and jamming while wearing a storm trooper mask, Kirkland definitely had a great birthday. “I wasn’t born in Atlanta, but I met my wife here,” Kirkland said, further bonding with his erratic fans. As far as they were concerned, he was a native.

Many more bands graced the stages of the first annual Identity Festival, including DJ Shadow, Steve Aoki and The Disco Biscuits. Hopefully, next time it’ll be on a weekend and the masses will come.