As a longtime fan of The Police, the creation of this playlist was inevitable. The trio formed in 1977 and had much success garnering eight Grammy nominations with five 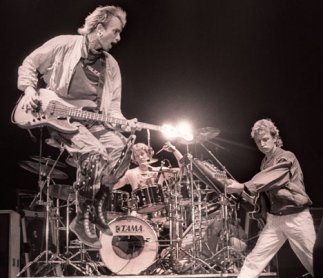 wins. Two of those were for Best Rock Instrumental Performance: “Reggatta De Blanc” (from Reggatta De Blanc, 1980) and “Behind My Camel” (from Zenyatta Mondatta, 1981). Both can be heard on this playlist.

Showcasing each individual’s stunning musicianship, solo instrumentals are also included here. Sting has had a very successful career post-Police. Stewart Copeland and Andy Summers both continue to be very active. Sole-American Copeland formed The Police in London in 1977. He quickly enlisted Sting (Gordon Sumner) and guitarist Henry Padovani. Soon after, Andy Summers was brought in and Padovani was kicked out. When asked about the band’s name, Copeland replied, “We saw it on the side of a car.”