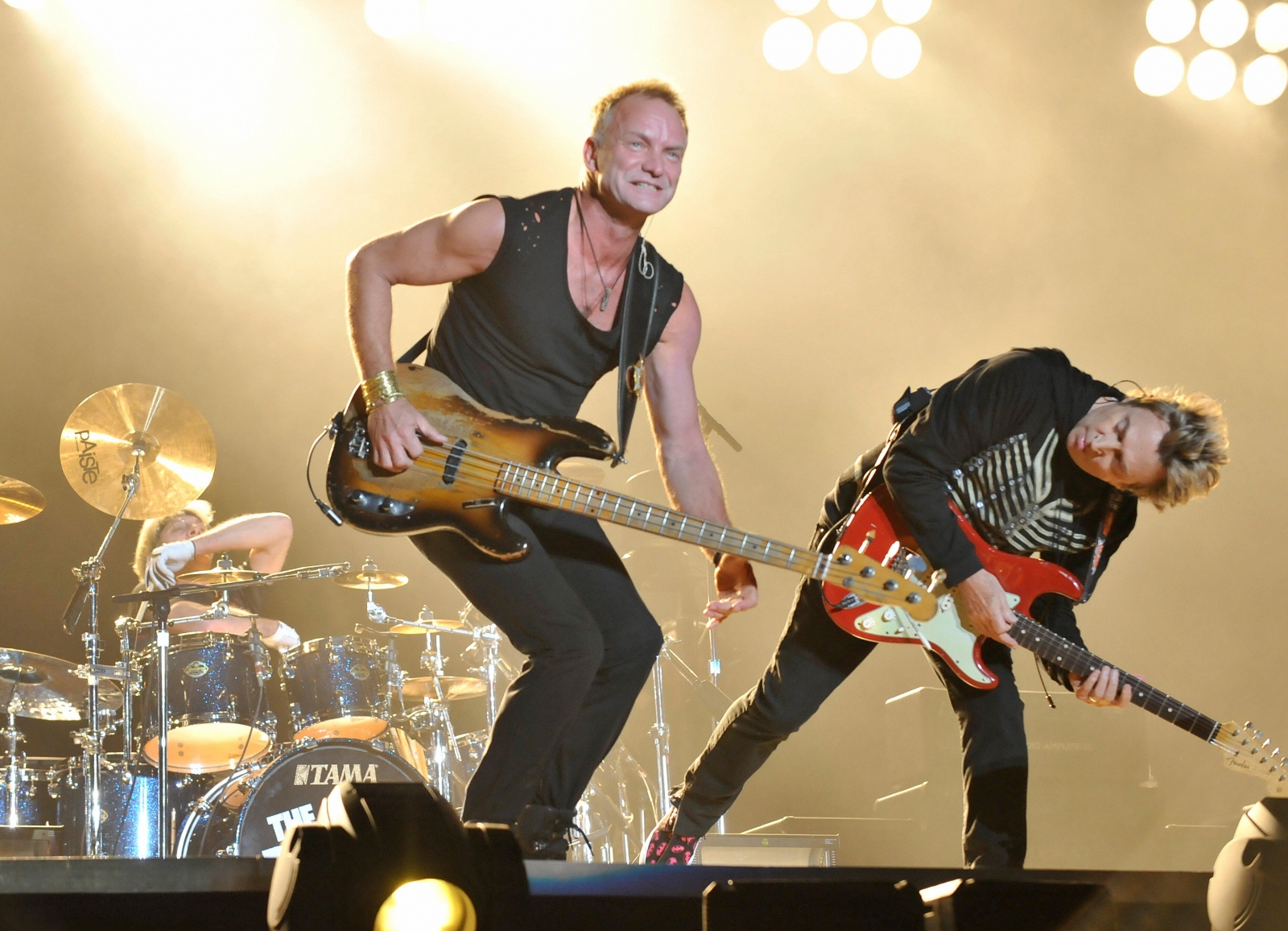 never do…have you seen my list? That would exceed Qatar’s national debt for a year). It’s because my old Police shirt has shrunk. That’s right. I think I’m taller now than when I was 18. I bought that one on March 25, 1982, in Kansas City, during the Ghost in the Machine tour at what I’m SURE was a much cheaper cost. So a replacement shirt was in order.

Anyway, when people ask me, “Who’s your favorite band?” the answer is always, “The Police” (even though they have not toured for 24 years). So, this one was pretty special. Imagine my excitement earlier this year upon hearing the reunion news. I just got stupid.

I’ll now start my “review” by discussing the opening act. Now, everyone knows this is a thankless job. NOBODY wants to see you. NOBODY cares about you. You just serve as the equivalent of theater’s dimming of the lights at the beginning of the play. Really. But for this show, I was very excited. I am a Fiction Plane fan. They’ve put out two full-length albums and one EP. Good, rockin’ stuff. But I’m sure the uninformed last night were thinking, “Isn’t it the purpose of a supporting band to complement the sound of the headliner? Yes, I say. Yes it is. Who would want an opening band to have too many similarities with the main course, you ask? You’re preaching to the choir, my friend. Fiction Plane is made up of an American drummer, a British guitar player, and a British bass player/lead singer (sound familiar?). While not relying as much on the reggae-tinged alternative sound, they do delve into it a tad. Here’s the news: the Fiction Plane lead singer is Joe Sumner. First born of Gordon Sumner…AKA Sting. What a sweet gig, huh? Touring with Dad? My wife made the point that while all the latecomers were getting their beers and taking care of business, they heard FP and probably screamed, “OMG! The Police have already begun!” Joe looks and sounds a lot like Sting. But it is a different sound. He was very animated, even jumping off the five foot speakers, bass in hands. But he is NOT trying to copy Dad. And until this tour, he never made mention of Sting during interviews or performances. And I’m sure he made it clear that he did not want that brought up. He wanted his band to make it on it’s own merits. But who could turn down opening every show in America for the Police? It was a highlight for me, and I wish everyone could have experienced their complete performance. A couple songs for you to check out are It’s A Lie and Two Sisters from their new album Left Side Of The Brain.

Onto the Police. They opened the show with Message In A Bottle. The sold out crowd knew all the words, and Sting was happy to have all of us back-up singers. This is a stripped-down sound. Sting on bass and vocals, Andy Summers on guitar, and Stewart Copeland on drums. Just the way it all began in 1976 (minus Henry Padovoni, the original guitarist). By the time the Synchronicity tour rolled around in 1983, they had the back-up singers and synthesizers. It was a large-scale production to say the least. The 2007 tour is not only a reunion, but a back-to-basics tour.

The boys sounded good. Andy, the elder statesman at 64, was better than ever. Grey-haired and 55, Stewart had his normal extensive drum kit, plus a platform behind his drums which rose up about five feet when he jumped back there to play the big drums, chimes, gong, etc. Sting, at 56, could have kicked half the asses in that arena. He has kept his body in very good shape.

This show was a hit factory. But, they did treat the real fans with some gems which the average radio listener did not know. For example: Hole In My Life, Truth Hits Everybody, and Next to You, all from their first album Outlandos D’Amour. Sting, after canceling a show four nights earlier because of a case of the flu, sounded great. And he did a few of his signature jumps, matching the crescendo of a song ending. Just not as frequently. Actually, Summers (the old man) did more jumping than Sting…and off of Stewart’s drum stand! Yes, they sounded excellent. And for a fan such as me who knows every song, this is saying something. That is true because the Police are not there to regurgitate the exact sound from their records. They’re a jam band. They reinvent each song when playing live. That’s why Voices Inside My Head/When The World Is Running Down… rocked. I mean ROCKED. And the combo of Can’t Stand Losing You/Reggatta De Blanc (“eyo, eyay, eyay-o”) was one of the highpoints of the show. They know the music and each other so well that they can take a song to a whole new place and make it work.

There were many singalongs and Sting talked with the crowd frequently. After playing sixteen songs, they thanked us and left. Of course, they returned shortly with four songs from their first and last albums. A very nice contrast, for me anyway. That set included So Lonely, which I can safely say is probably my favorite Police song. Again, “Thank you, goodnight.” This time though, Andy just stayed there. Sting and Stewart were gone. Andy began motioning for them to come back, while looking at his watch and throwing his hands in the air. This was hilarious and had fans cheering louder than ever. Finally, the other two came back and they ended with Next To You, the first song on their first album. Classic.

I know that these guys could pretty much sleepwalk through their entire catalog of songs and I know that they’re making millions for their retirement. But that soundtrack of my life that I sometimes mention is FULL of Police music. Standing there last night, I was thinking, “No one is enjoying this more than me.”

One night back in ’91, while working the late shift at the Ritz-Carlton Hotel in Kansas City, Sting returned from one of his few solo concerts that I did not attend. I was standing outside the front door when he was dropped off. “Here’s my chance,” I thought. As he approached me and we shook hands, I asked, “How was the show?” Sting replied, as only Sting could, “Well…no one asked for their money back.” And no one asked for their money back last night.

Here’s a peek at the set list:
Message In A Bottle
Synchronicity II
Walking On The Moon
Voices Inside My Head/When The World Is Running Down, You Make The Best Of What’s Still Around
Don’t Stand So Close to Me
Driven To Tears
Hole In My Life
Truth Hits Everybody
Every Little Thing She Does Is Magic
Wrapped Around Your Finger
De Do Do Do, De Da Da Da
Invisible Sun
Walking In Your Footsteps
Can’t Stand Losing You/Regatta De Blanc

First encore:
Roxanne
King Of Pain
So Lonely
Every Breath You Take

Second encore:
Next To You