The Reunion That No One Bet On

They say all good things must pass. David Lee Roth was out. Sammy Hagar took over. Then it was Gary Cherone for an eye blink. In 2008, that guy that Eddie Van Halen couldn’t 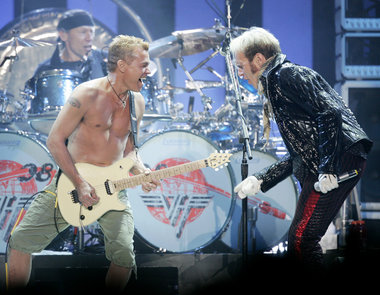 stand is now back in front. DLR in all his three-ring circus glory is back. Is this a good thing? Will it last? Will they avoid killing each other? Whatever your opinion, this was the near-original Van Halen lineup. The one asterisk would be the absence of bassist Michael Anthony. Recently fired, Anthony’s bass was picked up by 16-year old Wolfgang Van Halen, son of Eddie. The younger Van Halen did a fine job, but lacked the wild stage presence of Anthony.

The show opened with their cover of the Kinks’ “You Really Got Me.” This pretty much brought the roof down. DLR was as animated as ever and had several top-hat-and-sequined-jacket wardrobe changes. Backing vocals by Eddie and Wolfgang were right on and complemented Roth very well. The band went on to play such fan faves as “Running With The Devil,” the Roy Orbison cover, “Pretty Woman,” and “Dance The Night Away.”

Drummer Alex Van Halen was wicked on the kit. Like Eddie, brother Alex began the show shirtless. Besides the teenage boy onstage, the three middle-aged men all showed off quite the six-packs. Alex had a drum solo that probably lasted ten to fifteen minutes. The other band members took a long break, returned, and kept the music going.

With all the nostalgia, there were a few issues with sound. To begin with, technical difficulties were frequent during the evening. During the long trademark guitar solo by Eddie, the sound went totally out for what seemed like five minutes. He strummed, heard nothing, then threw his arms up looking off stage. Finally, someone figured out what was not plugged in and plugged it in. Eddie continued, unfazed. Also, Roth’s voice is not what it used to be. Maybe some of the bad notes could be blamed on the engineering, but not all of them. Roth did, however, show off his incredible gymnastic prowess, which has survived the band’s long recess. Several times, he jumped and spun, his knee nearly striking his head as his foot flew into the air. Each of these garnered a roar from the crowd.

Other hits included, “Hot For Teacher,” “Jamie’s Cryin,” and “Ice Cream Man.” Interspersed among the hits were song selections for true Van Halen fans. The boys dug deep for a few that never received any radio play, but were nonetheless very well received at this show.

The performance lasted an impressive two hours. After an explosive “Panama” and a rocking “Ain’t Talkin’ ‘bout Love,” the band left the stage for a very short recess until the crowd prodded them back out for one more tune. The opening keys of “Jump” blasted from the speakers and the crowd went hysterical. Confetti fell, Roth carried around a ginormous inflated microphone, and it was 1984 all over again.

Despite the sound glitches and vocal challenges, fans seemed to enjoy this reunion. Maybe as the tour progresses, Van Halen will perfect that sound that made them rich in the eighties.

Ky-Mani Marley, son of Bob, opened the show. It was a short and sweet performance by this unlikely Van Halen opener. His mix of reggae and hip-hop stylings was an interesting blend, although it seemed that few in the audience could care less. However, his cover of dad’s “No Woman No Cry” was outstanding.