Turn It Up Loud, Captain!

What could possibly be considered innovative for the band that’s done it all? A 3D IMAX film 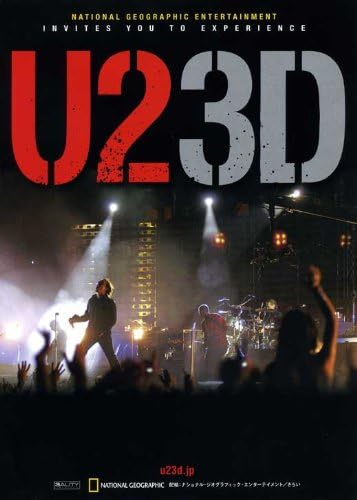 ? Yes, that would do it. Since their first album, Boy, was released in 1980, Irish rock group and BBITW (Biggest Band In The World) U2 has pushed the limits of celebrity, musical experimentation, and how to look at the world.

With Bono (born Paul Hewson) at the helm, anything seems possible. It has been said that U2 release albums in series of threes: Boy (1980), October (1981), and War (1983) were all straight-ahead rockers with enough hooks to catch a school of piranha; Then came The Unforgettable Fire (1984), The Joshua Tree (1987), and Rattle and Hum (1988) all possessing themes from their newly adopted home, America; followed by Achtung, Baby (1991), Zooropa (1993), and Pop (1997), considered their experimental period; and finally All That You Can’t Leave Behind (2000) and How To Dismantle An Atomic Bomb (2004), a return to what they did best: great rock (fans anxiously await the third installment in that last series).

One theme consistent throughout all of U2’s releases is a sense of spirituality not attempted by most bands. With Bono, who was raised Irish Catholic in the war-torn streets of Dublin, Ireland, no one can miss the connection with God. Even while many do not consider that to be a cool thing to do, U2 stay close to their religious roots. With this history, Bono and the boys showcase their views on non-violence and human rights through sound and vision. Before “Pride (In The Name Of Love)” – an ode to Dr. Martin Luther King, Jr. – was played, the Universal Declaration of Human Rights http://www.un.org/Overview/rights.html scrolled up a screen in Spanish while being read in English. Very powerful.

And so it goes, U23D seemed like a religious experience for the throngs of fans viewing it on that big screen. Culled from several shows in South America from U2’s 2005 Vertigo tour supporting the album How To Dismantle An Atomic Bomb, the opening scene shows a female concertgoer running through the corridor as you overhear the crowd cheering and music beginning. Missing the opening of a U2 concert rivals the college-years nightmare of oversleeping through a big final exam.

“Unos, Dos, Tres, Catorce!” …the opening of “Vertigo” and a power guitar riff now known to millions. The concert/movie was a visual explosion. Bono reached towards the camera several times as viewers in the IMAX theater reached back in an attempt to touch his hand. At one point he was playing a guitar and it seemed as if one could reach out and tune it for him. Not only was the visual show astonishing, but of course, the music was captivating. Playing some of their greatest songs, this could have gone twice the length of its 85 minutes and not bored the crowd.

All four members had their moments in the spotlight. The Edge (born Dave Evans) made music with his guitar that experts still can’t figure out, while bassist Adam Clayton kept the rhythm on the down low. On “Love And Peace Or Else,” drummer and U2 founder Larry Mullen, Jr. stood isolated on the walkway that extended out into the crowd. His instrument was a single drum that he pounded throughout the song. When he made his way back to the drum kit on stage, Bono took over pounding that drum in what must be one of the most dramatic moments of the show. The singer wears his heart on his sleeve and never shies away from showing it. The only possible complaint about U23D would be that the movie did not have the volume of a true U2 concert. Turn it up loud, captain!

Fans of U2 will love this thing. Those somewhat familiar with the band may become the newest fans. And those who couldn’t care less will – at the very least – say “not bad.” In 1984, Talking Heads’ Stop Making Sense did wondrous things for the rock concert film as a true art form. U23D has raised the stakes in 2008.

U2 closed out the show with a beautiful acoustic version of “Yahweh.” Back to their spiritual roots and hopefully, back to the studio to, once again, reinvent themselves as well as rock music.

Here’s the set list:
Vertigo
Beautiful Day
New Year’s Day
Sometimes You Can’t Make It On Your Own
Love And Peace
Sunday Bloody Sunday
Bullet The Blue Sky
Miss Sarajevo
Pride (In The Name Of Love)
Where The Streets Have No Name
One
The Fly
With Or Without You
Yahweh