Legend has it that guitarist Peter Buck was working at Wuxtry Records in Athens, Georgia when Michael Stipe strolled in. They talked about music and bands. The rest is 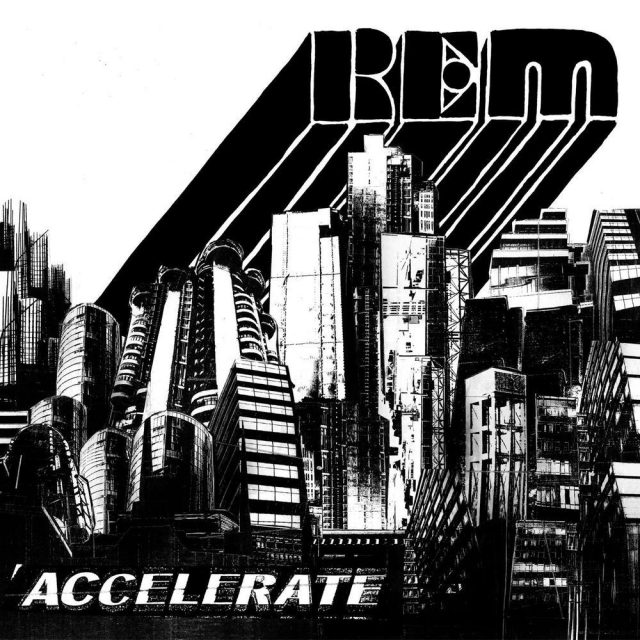 history. Twenty-eight years and fourteen albums later R.E.M. has become the little band that could. With the 1982 EP Chronic Town and 1983’s Murmur, the college radio indie sound was all but invented by Bill Berry, Peter Buck, Mike Mills, and Michael Stipe. Back then, supporters could join the R.E.M. Fan Club for $10. Always the band to put its fans first, membership is still $10.

After a hugely successful decade in the eighties which carried over into the early nineties, R.E.M. seemed to turn introspective, writing more personal songs. This was their nearly rock-free experimental phase. Not all experiments are successful, however, and this move led to limited exposure and fewer sales. The loyal fan base was growing up, getting jobs, and starting families. Bands evolve, people evolve, and things change. So, it was only normal that a “band of the 80s” faded from the spotlight. In 1997, drummer Bill Berry left the band after suffering a brain aneurism during an earlier tour in Europe. It was a huge personal blow to the other members, but they carried on. Since then, they’ve struggled to maintain their stride musically. They have still made good music, just not life-changing music that appeals to the masses. That is until now. “Accelerate” was released on April 1, and is no joke. Buck, Mills, and Stipe have returned to the guitar-driven sound and created their best and most urgent work in years.

The opener, “Living Well Is The Best Revenge,” showcases R.E.M’s return to rock. This simple, driving song harkens back to their punk-inspired roots. It also makes the statement that R.E.M. have been living well, with or without big radio hits. Ex-Ministry drummer Bill Rieflin and second guitarist Scott McCaughey complete the vital and aggressive new R.E.M.

The sound of “Man-Sized Wreath” is reminiscent of the Document era. Along with the band as a whole, Peter Buck’s guitar power has been resurrected. New life has officially been breathed back into R.E.M.

Then follows the first single from Accelerate, “Supernatural Superserious.” The song begins unassumingly with an a Capella Stipe singing “Everybody here…comes from somewhere.” At which point Buck submits a sonic interjection with his weapon, and listeners hear one of the most rocking and vital songs of 2008. With first-class instrumentation, intelligent lyrics, and terrific vocals (including the ever-present backing vocals of Mills), look for this one to grab a Grammy.

Track four begins with a melancholy piano and Stipe singing, “I’ve been lost inside my head / echoes fall off me / I took the prize last night for complicatedness / for saying things I didn’t mean and don’t believe.” “Hollow Man” then soars with guitar and drums and if your foot doesn’t tap, your heart isn’t beating. Stipe sings, “Believe in me, believe in nothing…” Towards the end of the song, a familiar guitar riff brings back memories of “Pretty Persuasion” from 1984’s Reckoning. Other straight-ahead rockers include “Accelerate,” “Horse To Water,” and “I’m Gonna DJ.”

The serious “Houston” traces the Hurricane Katrina story and how America failed the victims (“If the storm doesn’t kill me the government will.”). Another song with a social conscience is “Until The Day Is Done.” It was featured in the CNN special “Planet In Peril” which served as a wake-up call for the people of earth to save an environment in need.

Accelerate is a solid and effective effort by R.E.M., and a blueprint on how to revive a career nearly lost. U2 is a great example of how, after several great albums, a band can evolve and try new things just to remain fresh and relevant. Unfortunately, fans do not always travel down that road with their band. U2 then returned to the basics with 2000’s All That You Can’t Leave Behind and the result was nothing short of stellar. Accelerate is R.E.M.’s return. Let’s hope this revival is permanent.