Explosions In The Sky

Explosions in the Sky bring the thunder to ATL

When a friend calls and says, “There’s a great instrumental band playing this weekend,” it can be off-putting. Especially when you love lyrics so damn much. But, in the case of 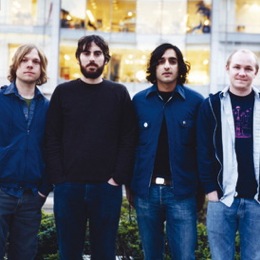 the Austin, Texas foursome Explosions In The Sky, that feeling was unfounded. Explosions has seemed to perfect the rock instrumental genre in just a few short years. For starters, at any given time, three guitarists are jamming away. All emotions seem to come out of their songs, which last an average of 8-10 minutes each (and sometimes WAY longer when played live). Most songs begin with a beautiful whisper and grow to a rock crescendo, all the while with precision results.

The band’s music was featured in the 2004 film Friday Night Lights. This move brought instant fame to the group. Since then, some of their songs have been used in other movies as well as commercials. A Cure-ish guitar can be heard throughout many songs, but no other comparisons may be made in that vein. Comparisons to the group Mogwai have been frequent, but Explosions has put their own mark on their music.

The bottom line is, expect a wall of noise – some distorted, some melancholy, some lithely poignant. Breaks between songs were hard to detect, as the band transitioned between them so stealthily. From the crowd’s reaction, these could all have been number one hits. Truly, Explosions In The Sky has a huge following…and rightly so.

Opening the show was Lichens a.k.a. Robert A. Lowe, based out of Chicago. Lowe began his set whistling like a bird. That’s right, he whistled, then looped it and did it again. After three or four bird-whistling loops, he began playing guitar. Soon, he began singing high-pitched, unintelligible lyrics, which were also looped. This was roughly a 24-minute song. One song. It was haunting and eerie, but extremely mesmerizing. David Lynch should love this mystical stuff.

Lowe is a talented musician and was a good fit with Explosions In The Sky. Both have raised the bar of rock instrumental music.