Intentionally or not, Radiohead is changing the way we buy music. Their latest release, In Rainbows, was released exclusively as a digital download for a price the buyer 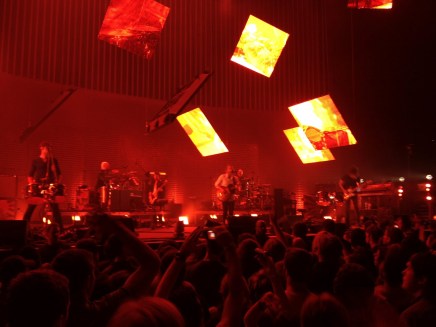 determined. Needless to say, many took advantage of this free offer and got it for nothing. Others, supportive of the band, gave a few bucks.

Widespread reports surfaced that a million downloads occurred by the time the physical cd was released. Radiohead’s genius is that so many more listeners acquired “In Rainbows” than if the album had been released traditionally. This exposure may explain several sold-out shows on their current tour in America. It may also explain why the music industry is very nervous right now. They are hoping and betting that no other groups get the urge to be so bold.

Formed in Oxfordshire, England in 1986, the band was originally known as On a Friday. When EMI signed them in 1992, a name change was requested. Being Talking Heads fans, the boys renamed their band after the song “Radio Head,” from the 1986 album “True Stories.” In that song, David Byrne sings, “Transmitter / Picking up something good / Radio head / The sound of a brand new world.” This is an apt description of Radiohead’s music…theirs is the sound for a brand new world.

The show began with the beautiful “All I Need” (“I’m the next act / Waiting in the wings”) as red lasers flashed on dozens of tubes hanging from the rafters. Behind the tubes was a large, rectangular screen that showed the band members from several different angles. As the evening progressed, a variety of lasers, lights, and designs shone on the tubes.

Throughout the night, Radiohead treated fans to some of their finest work. Possibly to some newer fans’ dismay, the band skipped over some of their earlier, more well known songs, thus avoiding a predictable evening. “Creep,” “High And Dry,” and “Karma Police” were left off the set list. Instead, deeper cuts were performed including the songs “Idioteque,” “Paranoid Android,” “How To Disappear Completely,” “Talk Show Host,” and “National Anthem.” Nine of the ten selections from the new release “In Rainbows” were played, with the only omission being “Jigsaw Falling Into Place.”

Leader Thom Yorke danced and gyrated throughout the evening in a somewhat Stipe-ian manner. His voice was clear and strong, while his guitar and piano playing was top notch. Guitarist Ed O’Brien experimented with many pieces, on the floor quite often adjusting the sound. Brothers Jonny and Colin Greenwood, playing guitar and bass respectively, added to the excellent sound created by the band. Drummer Phil Selway mastered the rhythm section.

As the rain came down at Lakewood Amphitheatre, the fans seemed to become more in tune with the band. It definitely added to the atmosphere of an awesome rock show. These were dedicated fans who knew the songs and appreciated the fact that a group like Radiohead could sell out a concert in the Bible belt. When performing “You And Whose Army?” Yorke sings “Come on if you think you can take us on.” Right now, there’s not a band that could win that challenge.

Opening the show was the trio Liars. This art-rock group relied heavily on the drums and had a sound that fit perfectly with a Radiohead show. Singer Angus Andrew could have given Mick Jagger a run for his money with his active stage presence. The thin crowd was supportive of the band, which was appreciative.