Laura Veirs at The Earl in Atlanta

Supporting Act(s): Liam Finn and EJ Barnes
In the Company of: Thomas S. 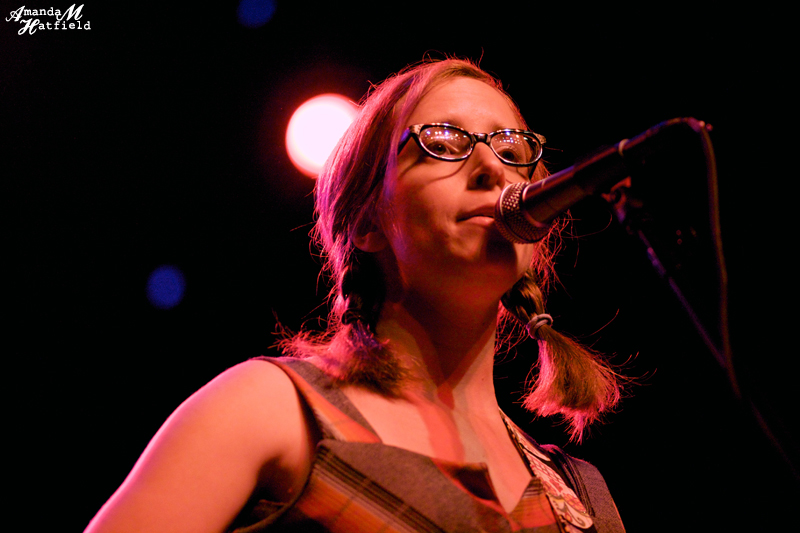 For the passerby, Seattle’s Laura Veirs may have sounded like an old Suzanne Vega cd spinning inside The Earl…or maybe one of a number of 80s female singer/songwriters accompanied only by a guitar. But this is 2008, and Laura Veirs is here and now. Her sound is fresh and original, and her guitar playing is marvelous. She does have a band – the Saltbreakers – which is also the name of her latest release (Nonesuch). For this stripped-down tour, though, she’s going solo. And it fits her music. It’s simple and melodic with discerning lyrics. Producer Tucker Martine (Decemberists, Bill Frisell) has worked with Veirs on all five of her studio albums. Veirs also collaborated with the Decemberists on their 2006 release “The Crane Wife.”

Like opening act Liam Finn, Veirs used a looping effects pedal quite frequently. She looped guitar tracks as well as vocals. It resonated from the speakers with a full, rich sound. What a great invention, the looping machine. About halfway through her set, Veirs informed us that she was going to attempt a subliminal message and hopefully we could figure it out. She then began chanting, “O-BA-MA…O-BA-MA…” The crowd seemed indifferent (except for a few saying, “HIL-LA-RY…HIL-LA-RY…” under their breath). If there were any McCain supporters, they failed to make themselves known. Ah, election years.

During another break in the music, Veirs held up a computer printout of someone’s photograph and said, “I’m supposed to give a shout-out to Todd from Chicago.” In the back of the room, a voice – I assume Todd’s – shouted out, “Yeah, thanks!” Apparently, one of Todd’s friends from Chicago sent the message with Veirs when she played Chicago three nights earlier.

When “Saltbreakers” was released, Veirs put out a request on her website for independent videographers and filmmakers to create their own videos of her songs. The top four have made it to her site. The second place winner was for the video of “Wrecking” and was won by Derek Searce, from Mableton, Georgia. Much of it was filmed in the Mableton Kroger, where I frequently use my Kroger Card. Searce was at the show and Veirs introduced him to everyone. She then treated us to a beautiful version of “Wrecking.”

For her final song, Veirs invited Liam Finn and EJ Barnes back onto the stage to perform “Galaxies.” It was the sole rocker of her set and was a rousing finale.

Finn himself put on a fiery show, playing seven selections from his excellent debut, “I’ll Be Lightning,” and one extra, which I’ll call “The Atlanta Cookie Song.” Finn is known to spontaneously blast into a jam, coming up with an original song that, more than likely, will never be heard again.

The show began with “Better To Be,” which showcases Finn’s knack to create perfect pop hooks, while still maintaining a folk music disposition. His songs are full of great hooks and soaring harmonies provided by Barnes. Finn is also a master with the looping effects pedal, generating as many as three guitars and a couple of vocals in one song, before savagely attacking the drums. Instead of his usual full drum kit, Finn remained standing, using only two drums. This afforded him the ease of going from the looped tracks to frenzied jumping, singing, and beating of the drums. From the sidewalk, one could hear the equivalent of a high-powered, full-tilt, five-piece rock band.

Finn went on to perform “Fire In Your Belly,” the excellent “Wise Man,” the album’s first single, “Second Chance” (“You stand around your haunted home / Those demons won’t leave you alone / Don’t forget me when you grow old…”),” “Energy Spent,” “Gather To The Chapel,” “I’ll Be Lightning,” and the infectiously rocking “Lead Balloon.”

By contrast, Finn’s intense, rocking set monopolized most of the energy for the evening. But the musical solar systems of Veirs and Finn are vastly different. The only logical connection as to why these two are touring together is that crazy looping effect pedal. Great minds do think alike.