Influences on the musical tastes of Dum Dum Girls come from a long list of artists. Dropped names have included The Ramones, Patti Smith, and Iggy Pop. For the new EP, 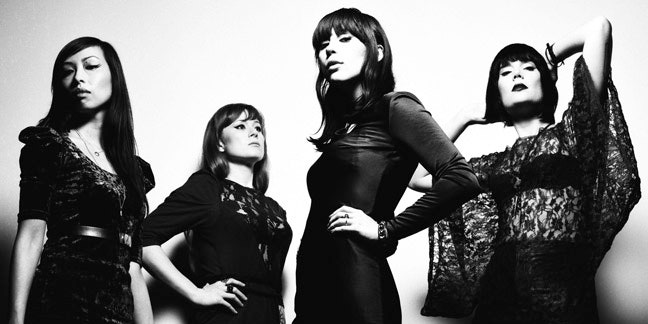 He Gets Me High (Sub Pop), Richard Gottehrer took the production reigns and created an exciting and fresh record. Gottehrer, who has produced the likes of The Go-Gos, Blondie, and The Raveonettes, has taken the band a step further. Combining indie rock with sixties lo-fi, The Go-Gos these gals are not. With a darker and edgier sound than girl group predecessors, Dum Dum Girls are aiming at a whole new audience.

Taking the stage a bit after 11:00, Dum Dum Girls appeared at first to be walking straight out of the Robert Palmer video “Addicted To Love.” All four ladies were wearing black with serious glares shooting straight through the crowd. However, that image was quickly erased when the music started. Leader Dee Dee (vocals, guitar) has perfectly described the the Girls sound as “blissed-out buzz saw.” That about sums it up. The remainder of the group includes Jules (guitar, vocals), Bambi (bass), and Sandi (drums, vocals).

The four-song EP was covered, which includes “Wrong Feels Right,” “He Gets Me High,” “Take Care Of My Baby,” and the final song of the evening – and the most anticipated – “There Is A Light That Never Goes Out.” This cover of the Smiths’ classic has been covered many times, but never so well. Coming up on the 25th anniversary of the release of that album, The Queen Is Dead, the Girls have timed this one well. With their near flawless arrangement, terrific musicianship (Johnny Marr is blushing at the guitar work, here), and wonderful harmonies, the Girls succinctly capture the teen angst which was Morrissey’s intent with this track.

As the Girls wind down their tour next weekend at SXSW in Austin, they gear up for the European leg with the opportunity to gather new fans around the world. For tour information and song streaming, go to Sub Pop.

Opener Dirty Beaches brought his minimalist rockabilly performance. Basically a guy and a guitar, much looping was on the menu for the evening. His version of the Johnny Cash song “The Singer” was both entertaining and haunting. This set could be described as Twin Peaks weird. The only thing missing was the backward talking dwarf (I’m pretty sure he was in the back room). David Lynch, by now, is surely a fan. That being said, this set was hugely original and complemented the entire evening in a special way.

On deck were Philadelphia’s Reading Rainbow. The duo consisted of Robbie (guitar, vocals) and Sarah (drums, vocals) and at first glance appears to be a White Stripes wannabe band. A closer comparison might be with Mates of State. During some of their great harmonizing, a little X may pop into your mind, with memories of Exene Cervenka and John Doe sharing the mic.