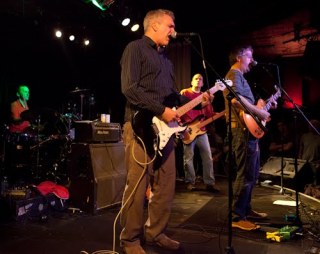 For fans of 90s alt-rockers Uncle Green (who became 3 lb. Thrill with a label deal), last night’s reunion show was a godsend. Although that major label thing did not last, the following did. After the successful Kickstarter campaign last year to master and self-release Rycopa, die-hard fans have been chomping at the bit awaiting this reunion show. The foursome did not disappoint.

And it also seems as if the band picked up right where it left off. Some rust is always expected for a reunion show. Seriously, these guys haven’t played a gig together for six years. Despite that, they sounded fresh and tight. And all those Rycopa songs from 1997? Still sounding relevant.

The boys joked and poked fun at each other throughout the night, exhibiting a friendship that is still apparently intact. Drummer Pete McDade, who did all the heavy lifting in finding those tapes, is raising a family in Atlanta. Bassist Bill Decker also resides in Atlanta while Jeff Jensen (vocals, guitar) lives in Washington, D.C. and Matt Brown (vocals, guitar) calls New Jersey home.

While the band revisited the glory days with many classics that the fans really were yearning for, the night was ruled by the highly listenable tracks from Rycopa. The driving “Not In Range,” was a favorite as was the awesome “Geronimo.” The dueling vocals of Jensen and Brown work together seamlessly. All four are seasoned musicians who play together as if that 15-year break was 15 days.

The wonderful “Pretty Good Lie” joins many other songs that could easily have made it on the radio back in ’97 (or even today). But somehow this is sweeter, after the aging process has matured these tunes and allowed them to percolate to perfection. Regarding the audience, it was a full house of old school Uncle Green / 3 lb. Thrill fanatics, who appeared to know all the words to all the songs. Even the new stuff.

Brown was fighting a scratchy throat and informed fans that he’d researched this on the Internet and put all his faith in one website, which instructed him to drink pineapple juice. He commenced to drinking that stuff like shots at the bar. Many are asking about another album, another show. No real answers yet, but if the support for Rycopa and this “one-off” show are any indication, these guys still have an audience. To pick up the new release, go to CD Baby.

Atlanta trio The Head opened the show with an energy that can only be possessed by the youth. Idealistic, catchy power-pop never sounded this good from what has to be Atlanta’s best kept secret. Twin brothers Jack (drums, lead vocals) and Mike Shaw (bass, keys, lead vocals) joined with their best friend Jacob Morrell (guitar, backing vocals) to bring an urgent and excellent sound to the stage. Supporting their latest release, Hang On, this group is poised to hit it big in a very short time.

The stunningly packaged CD was – get this – given away free at the show in exchange for an email. That’s how you do it, people. The live show is intense. Both brothers can sing and all three are exceptional musicians. Hints of the Stone Roses peeked out of a few songs, as did a tad of Arctic Monkeys. Be that as it may, The Head is all original power-pop and very talented. Go to The Head Music for free downloads of all their music. You will not regret it.

Pink Pompeii filled the gap with their unique sound. Rob Gal (production, guitar, synth) is joined by Nan Kemberling (vocals, cello) and Courtney King (vocals, guitar, synth) to create something completely different. Pink Pompeii describe themselves as “computer + guitar + cello + vocals + love + bass + keys = pp.” That about nails it. This electropop outfit from Atlanta has the classical-music-meets-the-dancefloor market all sewn up.

Pink Pompeii songs such as “Trash,” “Dark Cloud” and “Please Help Me Out” are crafted with a precision very few groups achieve, yet it was a let-yourself-go kind of set bowing to no rules. The ultra-perky Kemberling lit up the room with her smile and her voice. It’s good to see someone enjoying their work so much.

Gal, who is credited for production work on Rycopa, seemed to be the ring leader of the trio. He joined Uncle Green/3 lb. Thrill onstage for a few songs, as well.

This was a great night of diverse musical styles. Each band complemented the next and prepped the audience for a very enjoyable evening. Let’s hope it can be repeated soon.

I Don’t Wanna Know About It, He’s The Man, Elmira Place, Pretty Good Lie, Not In Range, Karen Dine, Daddy’s Got Money Again, Wake Up Now, Save A Seat For Me, Miracle Of Me, Geronimo, It’s A Red, Red, Red, Red, Redneck World, Diana, Don’t Fix It If It Works, Gunshow, Grrrranimal Party

Dymaxion, House With No Windows, I Always Knew You’d Come To Me