Atlanta warms up to The Cult

Live Review: The Cult with Against Me! and The Icarus Line at the Tabernacle in Atlanta, 6/17/12 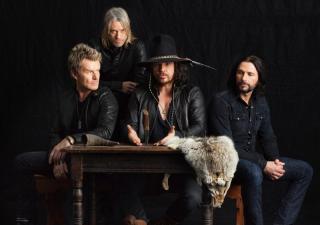 For fans of 80s music, The Cult should definitely be on the favorites list. Not just a rock band, but not heavy metal. Somewhere in between, with a Doors-like mysticism. Leader Ian Astbury could very well be chanelling Jim Morrison. The Cult‘s post-punk/gothic rock sound set them apart from other groups of the 80s. Rolling out of London in 1984 with their first major label debut Dreamtime, The Cult gained fame quickly and eventually conquered America.

Touring in support of their ninth studio album Choice of Weapon (Cooking Vinyl), the band is enjoying the fruits of its labor from the past three decades. They have definitely not lost a lot, with Astbury’s vocals close to what they were in the heyday, and the band tighter than ever. Granted, only Astbury and guitarist Billy Duffy remain as original members, with John Tempesta and Chris Wyse rounding out the rhythm section.

The band played through most of Weapon including “For The Animals” and “Lucifer.” These songs rock more than you think they might. Needless to say, fans were treated with the reason they were all there, with such gems as “She Sells Sanctuary,” “Fire Woman,” “Rain” and “Love Removal Machine.”

At times, Astbury wanted more from the crowd, yelling, “Get up off your fucking asses!” He almost came off as an angry Gene Simmons. After throwing a tamborine into the crowd, he seemed to be motioning to get it back several times the rest of the evening. Not sure what became of it. In the end, though, he was very appreciative of the fans and told them so.

Listen: “For The Animals”

Opening the show was the loud and proud sounds of The Icarus Line. Clearly inspired by acts such as Black Flag and The Stooges, lead singer Joe Cardamone aspires to be a 21st century Iggy Pop, with no shirt and skinny jeans. Iggy never screamed like that, though. This was one loud set, with Cardamone doing plenty of strutting and spitting. It was raw and raucous.

Middle band Against Me! was the real surprise of the evening, with an exceptionally tight sound and a set of terrific songs. You may have read in the news about frontman Tom Gabel‘s recent transgender process to become Laura Jane Grace. On this night, he simply wore eyeliner and very high heals, along with what appeared to be an all-leather outfit. Standard rockstar garb. Gabel’s voice, though, was the attraction. Falling somewhere in the neighborhood of Cheap Trick‘s Robin Zander, this thing is one powerful instrument. The band tore through a victorious set, including “Thrash Unreal,” “Stop!,” “New Wave” and the excellent “I Was A Teenage Anarchist.”

Besides the obvious talent of Gabel, 21-year-old drummer Jay Weinberg was the heart of the band. He ripped through each song like a veteran and kept the intensity dial on 11 (incidentally, Jay is the son of drummer Max Weinberg, of the E Street Band).

Listen: “I Was A Teenage Anarchist”

To catch this tour before it heads to Europe, go here: Tour info.

Categories: Against Me, Live Reviews, The Cult, The Icarus Line