Colin Hay live at the Variety

At 56 years of age, Colin Hay has little to prove. Reaching the peaks of success in the eighties with his band Men at Work, Hay put together an impressive body of work. The 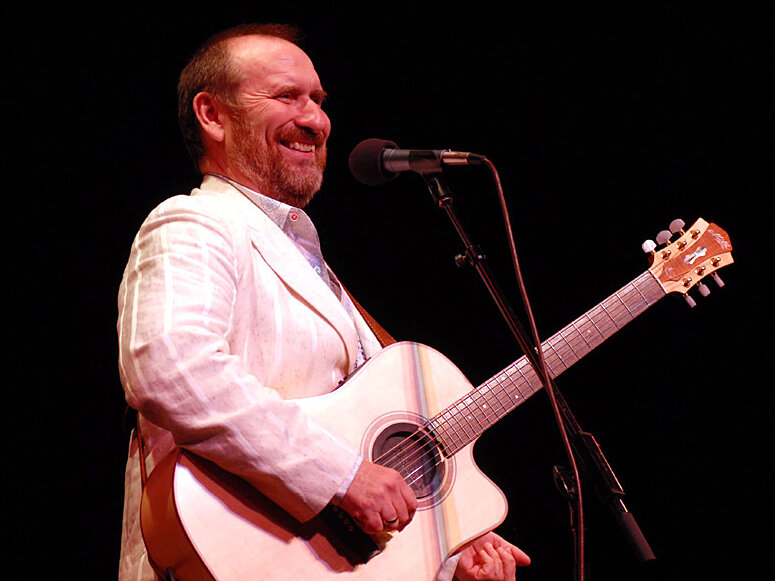 band’s first album, Business As Usual, stayed in the top spot on the U.S. charts for fifteen weeks in late ’82 and early ’83.

After only three studio albums, Men at Work called it quits, paving the way for a Colin Hay solo career. Born in Scotland in 1953, Hay’s family moved to Australia when he was fourteen. So, it was a surprise for many when Hay spoke with a Scottish brogue when everyone knows he comes from a land down under.

Hay kicked off the show with “Oh California,” an ode to his adopted American home. In an effort to “sound like Cat Stevens,” he performed “No Time.” Hay is touring with the ultimate stripped down set: just an acoustic guitar and catalog of catchy tunes. Coming from the new wave/alternative rock scene of the early eighties, it’s a wonder his new sound works. But it does. The lead-off single from that first release, “Who Can It Be Now,” sounded as fresh and relevant today as it did twenty-seven years ago (“Who can it be knocking at my door? / Go away, don’t come ’round here no more / Can’t you see that it’s late at night? / I’m very tired, and I’m not feeling right”).

While the music was outstanding, between-the-songs banter was brilliant. Hay is a master storyteller of the hilarious kind. Mostly talking about the early days, his family, and life in America, Hay had the crowd doubling over with laughter for what seemed like half the show. Yes, we paid to hear that pure, raspy voice sing those incredible songs, but this was like getting two shows in one.

He did his fair share of jabbing at contemporaries who, let’s just say, have enjoyed a little more success. Hay expressed his true admiration of Sting’s shoulders. “I mean, he’s an incredible singer and songwriter – ‘Roxanne!’ – but have you seen those shoulders?” And fun was also made of Sting’s name. He then went on to have a run on U2’s the Edge, and how Edge’s grandmother may have reacted to hearing his new nickname (“He’s calling himself what?”). Not coincidentally, Men at Work, the Police, and U2 were all vying for record sales at the same time. So, you may say Colin is a tad bitter, but I’d like to believe that he’s just having some fun.

Tolcher’s smooth vocals and exceptional guitar work made him a crowd favorite. Catch him on the road if he comes to your city.